Need help? Our customer service team is ready to assist!

When it comes to automotive LED lighting we get asked what the difference is between the three white LED color temperatures we offer. The answer is relatively simple when you understand the basics of how the color of light is characterized. For the sake of keeping the topic to automotive LED lighting, only the colors that are typically used in vehicle applications will be discussed.

What color should I get?

Color temperature is primarily a style choice, but the human eye does perceive a whiter light as being brighter. The image below shows a side by side comparison of our three choices. Ultimately it's up to you depending on your lighting goals. The higher Kelvin number DOES NOT mean the output will be higher in fact, it is quite the opposite. The higher you go in the Kelvin scale the lower the output.

Can I get a perfect match to my HID or existing LED bulbs?

It's nearly impossible to get an EXACT match in color temperature because of variations in the manufacturing of HID and LED products. An example of a slight variation is our V6 Triton system, which uses a CREE LED chip, and our Series 17 bulbs, which use a proprietary LED chip. Although they are very CLOSE in color, they are not a perfect match. Most people do not notice this difference in typical applications because vehicles rarely have bulbs right next to each other.

Another thing to remember is that a lot of sellers will state their LEDs are 6K, but in fact they're more of an 8K color, which tends to be blue/purple. The only way to make sure that you get the best match between products is to purchase your LEDs from us as we have the highest standards in color temperature accuracy.

What are the main differences between the color temperatures of light?

Take a look at the Planckian locus graph below. The main area to pay attention to is the black curved line inside of the colored area. As you can see from the graph, 3000, 4000, and 6000 numbers are all shown. This range contains the most commonly available colors of LED lighting for headlights, parking lights, and fog lights. 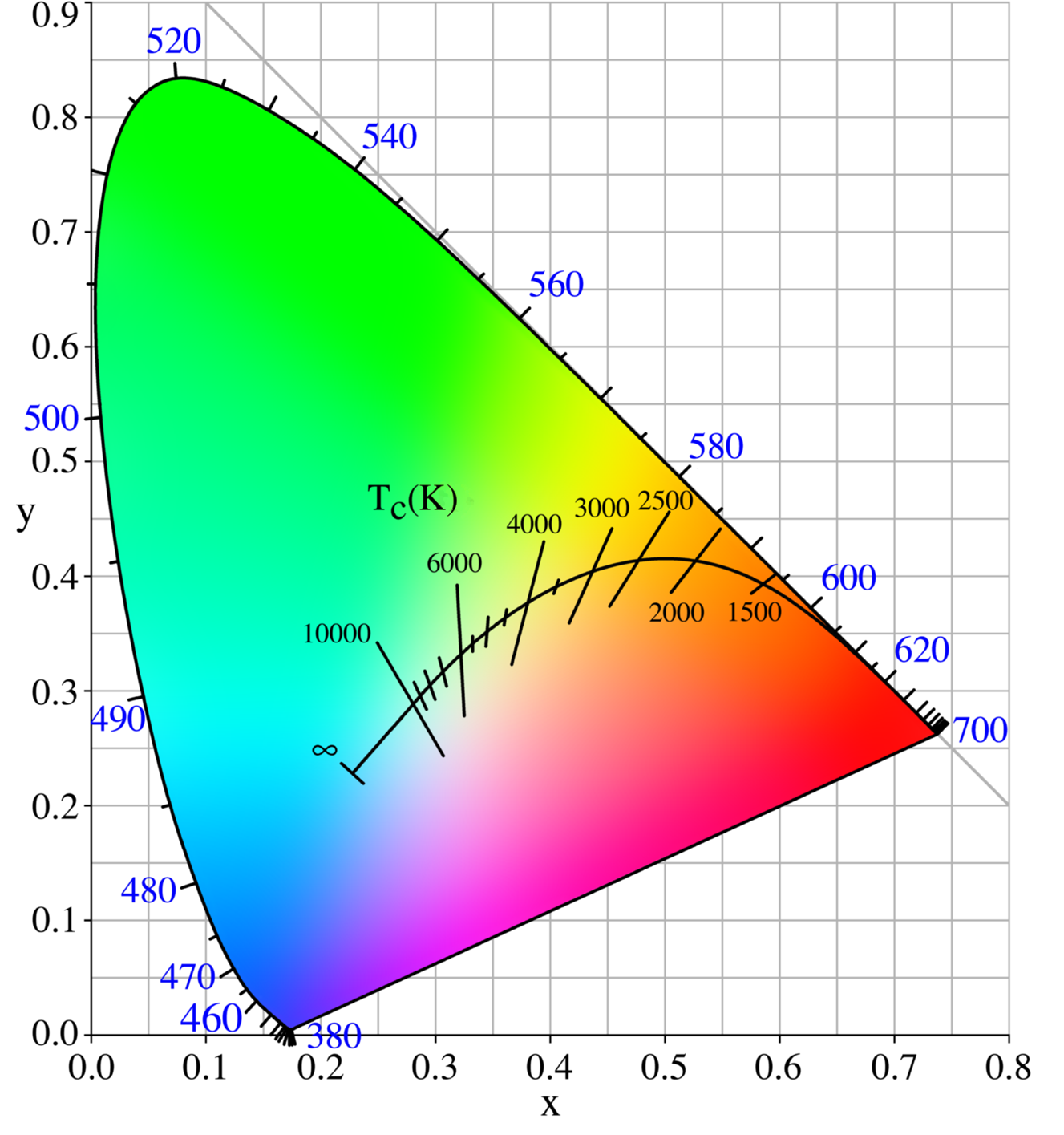 As seen on the graph, 2700 kelvin lighting is the average color of stock halogen/incandescent bulbs. It's slightly less white than 3000K, but it still has an ORANGE/YELLOW tint. Many of our customers are trying to upgrade from this color of bulbs as they feel that it makes their vehicle look more dated than it is.

As seen on the graph, 3000 kelvin is typically a yellow color commonly found in fog lights. Yellow light supposedly penetrates further because of its long wavelength, but it's still much smaller than fog particles. It also helps increase visibility to oncoming traffic.

As seen on the graph, 4300 kelvin is the color of most stock HID systems. It's far more white than 3600K, but it still has a very slight YELLOW tint. While more modern than 3600K, some customers still find that the 4300K isn't cool or blue enough.

As seen on the graph, 5000 kelvin is a nice white but has a slight tint of yellow. People who choose this color are usually trying to get a more natural white light that appears less harsh to the eye.

As seen on the graph, 5500 kelvin is the purest WHITE color temperature available. There is no yellow or blue tint to the light output. It's a very neutral tone that blends well with other colors.

As seen on the graph, 6000 Kelvin lighting falls between the white and BLUE side of the graph. People who choose this color are usually trying to get an exotic, more luxurious look. Even though the difference is slight when they are viewed side by side, the color of 5500K and 6000K LED bulbs are different.

What's the easiest way to remember which color is which?

talk to a lighting expert